Vietnam is the fourth largest exporter for textiles, garments and clothing worldwide after China, the European Union and Bangladesh. In 2018, the apparel industry reached an export turnover of more than 36 billion U.S. dollars, making it the third strongest export commodity in the country. In 2018, the manufacturing sector contributed 16 percent to the country’s GDP. Together with more than 2.7 million people employed in the текстильный и одежда industry across six thousand textile companies, the sector is an important pillar in the country’s economy.

Vietnam is highly dependent on the import of raw materials such as cotton, fiber, yarn, textiles and garments for clothing production as domestic supply has not been sufficient in the previous years, which concerns cotton in particular. In 2018, domestic cotton production amounted to about two thousand tons, while cotton exports were nearly hundredfold at around 1.6 million tons. Labor costs for clothing production in Vietnam is lower than in China, Indonesia and Cambodia which poses a major competition advantage in the market. Average monthly wages in the garment, textile and footwear industry range from 212 to 235 U.S. dollars.

Several international trade agreements including the EU-Vietnam Free Trade Agreement (EVFTA) and the Comprehensive and Progressive Agreement for Trans-Pacific Partnership (CPTPP) influence Vietnam’s export-driven growth model as well. As Vietnam faces the risk of relying heavily on raw material exports and the pressure to meet domestic demand, the government planned to support the development of raw materials for the textile, garment, leather and footwear industries to reach 65 percent of domestic supply for the textile and garment industry and 75 to 80 percent of domestic supply for the leather and footwear industry. Together with a strong setup of the sector and the advantages of competitive labor costs and logistics infrastructure, the government had planned to reach an export turnover of 40 billion U.S. dollars for 2019.

Demand share of apparel market worldwide from 2005 to 2020, by region 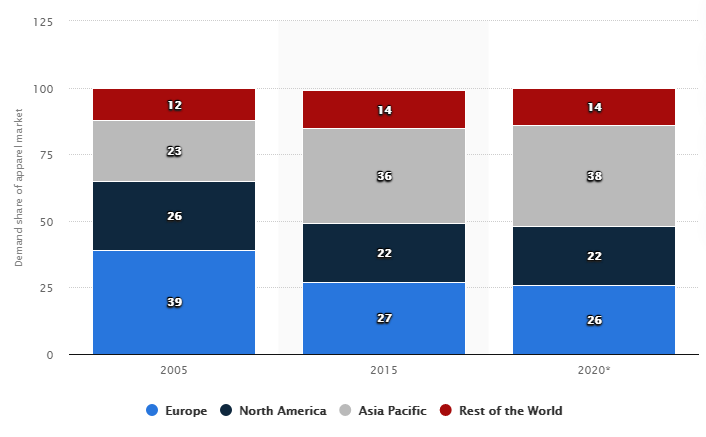